Andrea at So Over Debt and Jackie at Money Crush posted what their hypothetical budgets would be on a minimum wage salary so I figured that I would do the exercise as well to give everyone a Canadian perspective. 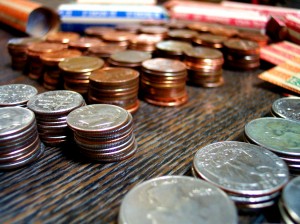 In all honesty, I think that being poor in Canada is much, much easier than being poor in the US. First of all, while we don’t have food stamps (to my knowledge), everyone who is low- and middle-income receives a tax rebate each month. I think that, when everyone is receiving a form of government assistance that is disguised as a “tax rebate”, it makes people less hesitant to rely on the government in times of need.

The two major reasons that my budget works are that a) our minimum wage is almost 10$ per hour and b) we have almost-free health care. In my scenario, if I had to pay for any dental work (which is only covered by the government if you are receiving welfare) or eye care, my budget for the money would be shot and I would probably have to go into debt or use my savings. As I would only be saving 135$ per month, I predict that my savings account would stay pretty much stagnant month to month as little expenses would be considered emergencies with such a low income.

My budget is perhaps a little unrealistic since, as a single person, I would probably rent an all-inclusive room at about 400$ per month vs having an apartment all to myself.

My final thought on this exercise is how foolish some people are. I understand that there may be circumstances beyond your control but here are a few pieces of information for my American friends:

1- In this province, we only study up until grade 11 for our high school diploma and we still have the highest drop-out rate in North America

2- In this province, all trade programs as well as the first two/three years (depending on the program) of post-secondary education are free. These two/three year programs lead to a college degree in anything you’d like – languages, science, veterinary assistant, music, computer science etc.

3- In this province, university education costs 2 100$ per year

In short, not only is it possible to live on a minimum wage salary in Québec, the lack of further education (or in some cases, basic education) in this province has led to a society that is full of minimum wage workers in every neighbourhood – and no one’s saying a thing.