Want to graduate debt free? Why not move to Quebec?

As a curious person (who should have been an Anthropologist), I’ll often invite myself into certain conversations that interest me. While this practice sometimes backfires, overall I learn a lot of things and get to talk to some very interesting people. In fact, it was by jumping into a conversation among colleagues that I came to be inspired for this post.

To start, let’s state two things that I feel are, more or less, facts for regular Canadians:

I went onto Stat Canada’s website to see what the average Canadian tuition rate is and promptly realized that the $5 700 national average was skewed horribly by various provinces. Nevertheless, this is the benchmark norm of the mass media and so I too shall use it here.

“Woah, woah, woah!” You might be thinking. “I can’t just go to Quebec and take advantage of their low tuition rates!”

Quebec’s low rates are applicable to anyone who is a resident by the college or university’s billing date (for McGill, this is August 15th). Residency is established once you’ve lived in Quebec for 12 of the past 18 months and weren’t studying full-time. 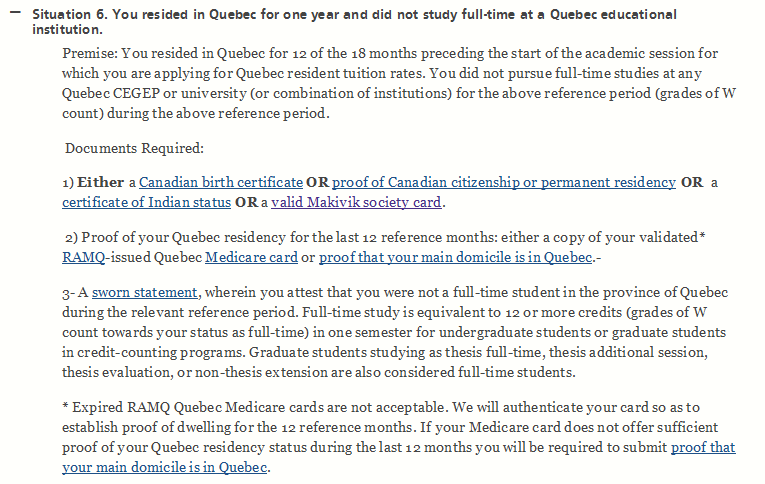 Jane, a high school senior from Thunder Bay, is sitting in French class one day, getting frustrated because she can’t figure out the difference between imparfait and passé composé. She’s hoping to go off and study business at the bilingual University of Ottawa in the fall because they’re offering her a great scholarship — $3 000 per year! She isn’t sure how she’ll pay the difference but who cares? That’s what OSAP is for, right?

Heather, another high school senior from Thunder Bay, is also struggling with her French verbs. She knows that learning French is important because she hopes to get a good government job after graduation. Instead of going to university in the fall, she’s planning to move to Montreal — an English mecca in French-speaking Quebec. Unlike most students who study in Montreal to “learn French” while subsequently never leaving the English university ghettos, she plans to take a gap year and work in retail to practice her language skills.

5 years from now, who’s better off? Jane, who, a year after graduation, is swimming in student loan debt and still struggling with wretched French past tense verbs or Heather who’s just graduated debt free (and is now more or less bilingual!) — having used her gap year savings to pay her lower tuition in cash each year?

To be fair, as an transplant from Quebec, I can see how this plan might not be for everyone. For one, a student might not speak French at all, which would make it difficult for him to get a job. Also, sometimes an 18 year old just doesn’t feel comfortable moving across the country. Actually, to be fair, the idea of moving to scary ole Quebec might be enough to put people off this plan.

Luckily, I have another solution to the high-tuition woes! Why not move to Newfoundland? Or even to Manitoba for that matter? While Quebec has the lowest tuition in the province, Newfoundland is in such a close second that the difference is negligible once student fees are added in.

Too many students are trying to do the right thing — win scholarships, work during the summer, live at home to save on costs — but, as student debt averages show, this simply isn’t enough. Think outside the box and start looking for less conventional ways — like this one — to graduate debt free.

*Notes about the chart: The Quebec rate was modified from the Stats Canada data for the purpose of this exercise because it, along with the data from Nova Scotia, blended in- and out-of-province rates together. I simply took the government regulated Quebec tuition rate.